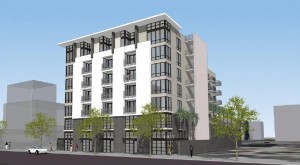 Urban Village | South Park is a 7 story mixed use development project with 96 apartment units and 4 design centered live/work units located on Olympic and Olive. South Park  is a dream for urbanists as the neighborhood balances residential harmony with downtown amenities and we are ecstatic to contribute to the urban fabric.  Urban Village completed entitlements of the project May 20th and completed the acquisition of the property on June 20th. While many projects in Downtown cater to students and offer a dorm-ish environment; Urban Village | South Park is a blend of harmony and amenities with private roof decks, exclusive dog park and fitness center for Down-towners.

Cheryl Pestor, SVP of NAI Capital, represented a private party on the sale of a parking lot located in Downtown Los Angeles on Olympic and Olive, to Urban Village. From the beginning Cheryl played and integral role, communicating critical points to all parties involved. The sale closed on time, on budget and we could not have done it with out you Cheryl. Love, Team Urban Village