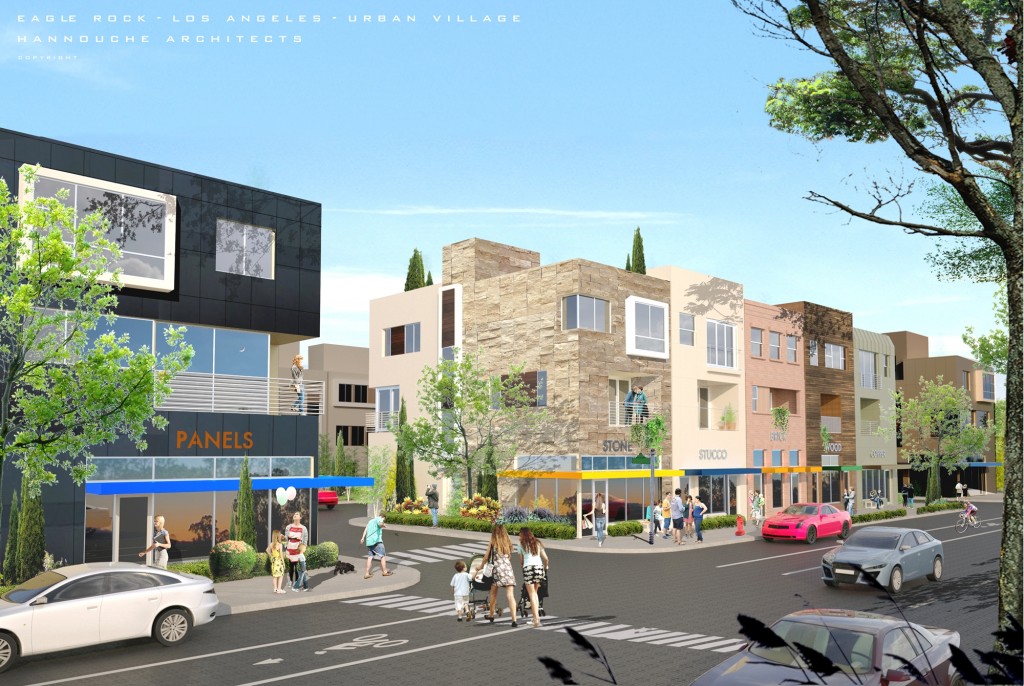 Urban Village | Eagle Rock is in the early conceptual process, gathering feedback from the community, city and stakeholders to design a creative mixed-use project that reflects the eclectic and vibrant Eagle Rock neighborhood. The mission is to design a project with uses for day-time and night-time populations that promote community involvement. Further the project will support small businesses and the pedestrian experience on Eagle Rock BLVD. with fine grain retail stores.

Area:  Eagle Rock is a neighborhood in the Northeast region of the city of Los Angeles, California.  Originally its own city incorporated in 1911, Eagle Rock was annexed by Los Angeles in 1923.  In present day, it is now characterized as a suburban area of the greater Los Angeles metropolitan region with the presence of a superior educational institution, Occidental College, an artistic-spirited community, and adjacency to multiple major job markets.  An area resident can grab fresh produce from the Friday evening farmers market, pull up a chair at an independent coffee shop, or enjoy multiple prominent specialty restaurants and gastropubs all within a short drive.  The particular location offered by Urban Village’s Eagle Rock Residences is especially well-positioned to these key amenities as well as conveniently located to the offerings of Pasadena, Glendale, Hollywood, Echo Park, Silver Lake, and Downtown Los Angeles.

The subject site is located half a block south to the intersection of Eagle Rock Blvd. and York Ave.—the closest major intersection to Occidental College as well as a majority of Highland Park’s popular gastropubs and bars on York.  The surrounding environs directly within a three block radius of the site include multiple apartments, a Fresh and Easy supermarket, a gas station, a Time Warner Cable office, a Montessori private school, a Starbucks coffee shop, a church, future small developments, and other neighborhood-serving retail.

York Boulevard to the East of the site is known for multiple hip gastropubs and bars.  The area has historically had a strong artistic presence and today hosts art galleries and boutique retail spaces, including the Galco Soda pop shop, a family-owned store that claims to have one of the best craft beer and eclectic soda selections in Los Angeles.  Additionally, a future park is on its way on the corner of York Blvd. and Avenue 50 as the City has just purchased land on York for this purpose.  Much of the span of the York corridor to the East of the site from Eagle Rock Blvd onward is actually within the border of the Highland Park neighborhood.  In a survey of 600 Redfin.com real estate agents, Highland Park was named as the #1 hottest up-and-coming neighborhood in the United States, with Eagle Rock coming in at #4.  While the corridor still somewhat maintains the exterior of its working class Mexican roots and indications of its status as a “transitional neighborhood”, an intimate knowledge of Highland Park’s presents a locale of young professionals.  Anecdotally, many of the bars and restaurants are frequented by mature crowd of age 30+ as the major demographic in contrast to the age 21-29 demographic often seen at other bars and nightlife spots in greater Northeast Los Angeles.  Urban Village holds the thesis that this older demographic observable in Highland Park and Eagle Rock is a positive as it is this demographic that will most likely be able to purchase a home in the project.

Running perpendicular to York and only a couple minutes driving distance away from the subject property is Colorado Boulevard, Eagle Rock’s premier streetscape, which connects the Eagle Rock neighborhood with Pasadena to the east and Glendale to the west.  This arterial hosts the neighborhood’s Trader Joes, a “slow” fast food LA icon known as the Oinkster that serves up superior burgers and Belgian fries, Cacao, a gourmet Mexican restaurant, Cardio Barre, a trendy ballet-based fitness center popular among women, a specialty independent coffee shop known as The Coffee Table, and multiple other neighborhood bars and restaurants.

Cheryl Pestor, SVP of NAI Capital, represented a private party on the sale of a parking lot located in Downtown Los Angeles on Olympic and Olive, to Urban Village. From the beginning Cheryl played and integral role, communicating critical points to all parties involved. The sale closed on time, on budget and we could not have done it with out you Cheryl. Love, Team Urban Village